I’ve been deploying and maintaining wireless IP handsets since the original Symbol Netvision handsets back in 2004 with the original Nortel Internet Telephony Gateway (ITG) card in the Nortel Meridian-1 PBX. While technology has come a long way in that time, both from an IP telephony and wireless perspective, there are still a large number of pitfalls to implementing a voice quality wireless network.

As a standard I try to design data grade networks for -70dB of coverage while I try to design voice networks for -60dB of coverage. This can be a challenge with both 802.11b/g and 802.11a networks. With 802.11b/g you only have 3 separate channels (United States) to work with which can lead to signal interference from adjoining APs. While you have more channels with 802.11a you end up with some channels maxing out at 50mW while other channels max out at 100mW and you can even end up with channels that are not utilized by the wireless handsets.

Lately I’ve been supporting the Avaya (formerly Nortel; Avaya Blue) 6100 series wireless handsets with the Avaya 2245 Wireless Gateway which provides the QoS utilizing the Spectralink Voice Priority (SVP) protocol.I have four large facilities with approximately 200+ wireless IP handsets at each facility. We have multiple Avaya 2245 Wireless Gateways at each facility for redundancy and each 2245 can handle 80 concurrent calls.

We recently tried moving a large Avaya 6140 wireless handset implementation from the 802.11b/g radio (2.4Ghz band) to the 802.11a radio (5Ghz band) and we learned a great deal. Why did we try the move? Our public/guest wireless runs on the same 2.4Ghz band and was starting to compete heavily for both RF time and bandwidth against our voice traffic. We were hoping to alleviate some of the issues by moving our voice traffic to the 5Ghz band on the 802.11a radio. Prior to any of these changes the voice wireless solution was highly regarded by our staff. While there were coverages issues in some very small areas, the clinical areas of our hospitals had -60dB of coverage and the voice quality was excellent.

In 2008 I wrote about, “What does watchdog timeout mean on a Nortel wireless phones?“, where I describe some of the challenges at that time.

Jump forward almost 5 years and the same challenges still remain, however, some of them will depend on the radio you are trying to deploy voice on. About 12 months ago I heard a wireless vendor say they wouldn’t support a voice wireless network unless it was deployed on the 802.11a (5Ghz) radio. When I inquired why I was told because it has more bandwidth and channels. I was only consulting on the project so I didn’t challenge the vendor in front of the client , but in retrospect I should have called bullsh*t. In reality the wireless vendors want customers to use the 5Ghz network because they know they’ll need to purchase more APs, it’s that simple. In legacy construction, aging 100+ year old hospitals, I find that the 2.4Ghz coverage is easily 50% larger than that of the 5Ghz band. In more modern construction I generally find that the coverage of the 2.4Ghz band is about 33% bigger than the 5Ghz band. For example, if I perform a site survey I might get a -60dB signal from the 2.4Ghz radio, from that exact same position I might only get get -70dB from the same AP (has multiple radios). In some of the sites I support you might get -70dB outside a room but if you walk all the way into a room and close the door you’ll see your signal drop all the way to -80dB (which is useless for IP telephony and just about everything else).

The Avaya 6100 (formerly Nortel) or Avaya 3200 Series Wireless IP phones will not utilize 802.11a channel 165. You need to make sure that you are not using channel 165 on any of your access points/ports or the wireless IP phones will be blind to the network at that specific AP location leading to a potential lack of coverage in that area depending on your AP density. This also holds true for Cisco and Spectralink  wireless handsets as well.

We previously knew that the 5Ghz 802.11a band didn’t provide the same area of coverage as the 2.4Ghz 802.11b/g band but we were completely caught off guard by how varied the difference was depending on the physical building itself (12 inch concrete block walls, plaster wall with wire mesh, etc). In some legacy hospitals you could stand under and AP and get -45dB, go literally 5 feet around a corner and watch the signal go to -81dB. You could get -60dB of coverage from the 802.11b/g radio of an AP and at the same physical location you would only get -75dB of coverage from the 802.11a radio.

The signal from our 802.11a radios in the 5Ghz band was unable to provide the -60dB that our design called for. In many areas it was unable to even provide a -70dB signal and as a result we experience significant voice quality issues. With the degraded RF signal we also started observing roaming issues with handsets bouncing back and forth between APs which were at the fringe of the coverage area.

It’s always important to fact check any vendor, this is especially true in Technology where vendors have a tendency to bullsh*t themselves through a question or problem (flux capacitor). With a G.711 codec you only need 64Kbps (really 87.2Kbps) of bandwidth and a single 802.11b/g AP can easily handle upwards of 10 concurrent calls.

If you are concerned about RF coverage then the 2.4Ghz band is going to be a better solution than the 5Ghz band.

It’s super important to test, test and test again. This way you’ll know before your users (and boss) if there’s going to be a problem.

The APs will try to associate via a Layer 2 broadcast with a controller, if they fail to adopt via Layer 2 they will issue a a DHCP request with the vendor class IDs listed above.

This is really helpful in your IPAM or DHCP server, you can define specific pools based on the vendor class to return very specific DHCP options. In this case you would probably want to return DHCP option 189 (string) with the IP address of the wireless LAN switch. You can include multiple IPs separated by commas.

Nortel has released a technical bulletin notifying customers of an issue with the Nortel 6100 Series Wireless LAN handsets running software release 2.x (build 115.019 or earlier) when the phones are paired with battery packs that are manufactured around or after January 2009.

The phone will hang up displaying an I2C error when it first boots up. You can read all the details in the Nortel technical bulletin;
Nortel WLAN Handset 6100 Series Battery Error: “I2C” Battery Issue (Software Rls 2.x Fix – Build 115.021)

While I’m at it I should probably mention that Nortel has released software 115_021 and 115_022 for the Nortel 6100 series WLAN handsets. I personally had an issue with 115_021 after I upgraded a 6140 handset. The ear speaker wouldn’t work at all, not after resetting it, not after switching batteries, not after praying over it. I could place and receive calls and the speaker phone worked fine but I couldn’t even get dial tone out of the ear speaker in the handset. After upgrading to software release 115_022 the problem has not re-occurred.
In addition Nortel has also released v2.4 of the Handset Administration Tool (HAT). This tool allows you to configure the 6100 series phones through the cradle from a USB port. This tool is a godsend for those of us that remember configuring every phone by hand through the dial pad (you trying entering a 128bit WEP/WPA key through a dial pad and not get it wrong).

You can download the new software and the new version of HAT from Nortel;
http://support.nortel.com/go/main.jsp?cscat=SOFTWARE&poid=18281

Motorola has released software v3.3.1 for the WS5100 and v1.3.1 for the RFS7000 Wireless LAN Switches. You can find the release notes for the 3.3.1 (WS5100) software release here. And you can find the release notes for the 1.3.1 (RFS7000) software release here. We’ve been running v1.3 on the RFS7000 for the past few months now with only a few small problems. We hope to start testing the Smart RF feature set that was released in the 1.3 Wi-NG software base very soon. We’re also eager to start testing the AP7131 802.11n Access Port in a few specific locations.

Resiliency: SMART RF Management that enables the WLAN to automatically and intelligently adapt to changes in the RF environment to eliminate unforseen gaps in coverage.This technology provides dynamic network optimization to ensure user quality of experience at all times by automatic adjustments to channel and power (on detection of RF interference or loss of RF coverage/neighbor recovery). 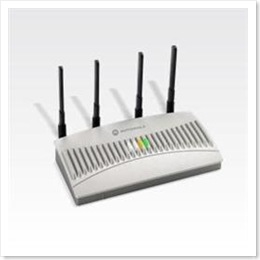 I recently needed to reset one of these access points and thought it would be useful for anyone else looking for information on the subject.

The AP5131 should perform a full reset and end up at the login prompt after it has booted. The default administrator password is “symbol” (case sensitive).

Upon logging in for the first time the administrator should be prompted to change the password. The default administrator username is “admin”.

Note: the default IP address of the AP5131 is 192.168.0.1 and the DHCP server is enabled in the factory configuration so you should be able to connect your PC to the LAN port and then open a web browser to access the Admin GUI.