Over the past few weeks I’ve been working with HP switches so I decided I would extend my series on LACP trunking to include HP switches. In my lab I used HP 2810 switches which are dated but the concepts are the same for any of the newer HPE switch equipment. I cabled the HP switches to a pair of Cisco 2950s, you may noticed that I’ve changed some of the ports I’m using from the previous lab examples (check the diagram).

I noticed while working on setting up this lab that the MST digest between the Cisco and HP switches didn’t match. After some quick research it appears that the Cisco 2950s I have in the lab operate with a pre standard MST operation. Other Cisco switches identify them as such and are interoperable but you may have issues with third-party devices that are expecting the 802.1s standard. You can see both digests from the Cisco 3750 below and they match both the Cisco 2950 and the HP 2810 switches. 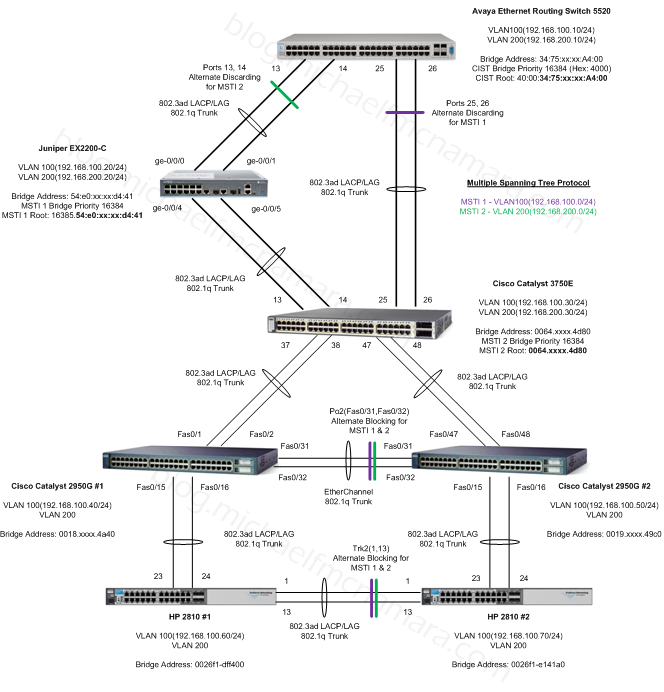 You’ll notice the HP switches at the bottom of the diagram. It was pretty straight forward but here’s what I needed to do.

First we needed to configure the ports on the Cisco 2950s that would be connected to the HP switches. I used Port Channel 3 for this and enabled LACP;

That’s all well and good but I’m sure you want to see the output… is it working as expected? Well let’s check it out.

We can see from the data below that LACP has established to the HP switch and Spanning Tree is working as expected;

We can see from the data below that LACP has established to the HP switch and Spanning Tree is working as expected;

I had an interesting issue this past week when I performed a software upgrade on a Gigamon GigaVUE-420. While the upgrade was fairly straight forward I ran into a problem after the upgrade with the IBM Tealeaf solution. We have multiple SPANs and TAPs feeding data into the Gigmon which then copies the traffic out to a number of solutions, including IBM’s Tealeaf. After the upgrade all the other systems seemed to be working fine with the exception of the Tealeaf Linux capture server. The model of Gigamon we have doesn’t allow for altering the actual data, we can filter the data based on anything in the headers but we can’t alter the data. The SPANs from our Cisco 6509E and 6504E switches were setup as 802.1q tagged trunks so the Gigamon would replicate the frames as 802.1q tagged packets. The issue appears to have been how the IBM Tealeaf Linux server handles 802.1q tagged packets. I was able to connect a Windows 7 laptop to the Gigamon and validate that the Gigamon was working properly. I did need to make a registry tweak to the Windows 7 laptop so it wouldn’t strip the 802.1q headers.

Unfortunately IBM support wasn’t very helpful, they were more interested in placing blame than they were in helping us understand why the Tealeaf capture server wasn’t working. They were completely focused on the fact that it worked before the upgrade so it must have been the upgrade that broke it. While that was technically true there was something else at play since I had already verified that the traffic was being forward properly by the Gigamon.

Ultimately one of the team members reconfigured the Linux NICs to support 802.1q tagging and built sub-interfaces so tcpdump could read the traffic. I never did find out what broke but I’m guessing it has something to-do with the NIC configuration on the Tealeaf Linux capture server.

I decided to write about this topic since I recently encountered operational “difficulties” with both my prior employer and my current employer that involved the same near identical mistake of a network engineer accidentally overwriting the list of allowed VLANs. In the most recent case it was a simple oversight on the engineer’s part and the problem was quickly corrected. On the prior case the engineer had issued the command “no switchport trunk allowed vlan x” which seems to have given NXOS a bit of a fit. The ports that were in that vPC needed to be shutdown and then enabled to clear what appeared to be a software bug. While the running-config indicated that the VLANs were being trunked on the ports, the MAC/FDB table had no entries of those VLANs on the affected ports.

I strongly recommend that folks prune VLANs that aren’t being used from their trunks, however, you need to be very careful with how you add and/or remove VLANs from the list once the trunk is up and running.

In the past I’ve seen folks accidentally overwrite the VLAN allowed add list by using the “switchport trunk allowed vlan” command. Look at this sample configuration;

Now let’s say we wanted to add VLAN 156 and we using the following command, taking the allowed VLAN list and adding VLAN 156;

The problem with this is that we just missed the fact that VLAN 155 was also on that trunk and we just removed it from the trunk with the that previous command.

The morale of the story – be careful when you add/remove VLANs from trunk ports and make sure you use the switchport trunk allow vlan add|remove command. In the two previous posts I covered how to create multiple VLANs, trunk those VLANs between multiple stackable Avaya Ethernet Routing Switches utilizing Multi-Link Trunking and how to create Layer 3 IP interfaces to be used for routing IP packets between those VLANs.

In this post I thought I would expand the network topology of my previous two posts to include a Cisco Catalyst 3750-E. I’ll specifically cover how to trunk (bridge) multiple VLANs between a stackable Avaya Ethernet Routing Switch and the Cisco Catalyst 3750-E and how to configure multiple interfaces in a Link Aggregation Group (LAG) utilizing LACP similar to Avaya’s proprietary MLT feature.

Let’s start by making ports 45 and 46 trunk ports which will utilize 802.1Q tagging;

Let’s add the VLANs we wish to bridge across the trunk ports;

Now we’ll enable LACP on ports 45 and 46 using the same LACP key which will automatically create the LAG;

You might be looking at the output above and asking yourself what’s “Trunk 32”? Let me provide some quick background. You can have a total of 32 MLT/LAG trunks on a stackable Avaya Ethernet Routing Switch. When you create LACP trunks the switch automatically creates a LAG in the MLT table dynamically from the bottom up. While in the previous post I created “Trunk 1” by trunking ports 47 and 48 together (see above), in this post I’ve created an LACP trunk on ports 45 and 46 which will be reported it the switch as “Trunk 32”. You can also see it in the MAC/FDB table above.

Let’s give the switch an IP address in VLAN 1 for management;

Let’s add the appropriate edge ports to each VLAN;

Let’s configure ports 45 and 46 as trunk ports and bond them together in channel-group utilizing LACP;

You might be asking why didn’t I assign the VLANs to the trunk ports on the Cisco Catalyst 3750-E… well with Cisco switches a trunk port is by default a member of all the VLANs that exist on the switch. So you don’t need to specifically add a VLAN to a trunk port, however, you can override the default behavior by telling the switch to only carry specific VLANs on a specific trunk port – this is called VLAN pruning.

Please feel free to point out any inconsistencies or errors I might have made.