This morning I’m still trying to clean up my servers and I’ve run into another issue. Looks like Verizon is blocking all SMTP mail from one of my servers;

Ok, it’s quite possible that someone on the discussion forums has been a misbehaving so I need to make sure there’s no legitimacy to this report. I need to scour the log files and make sure that there’s nothing going on. I keep the log files on my server for 30 days, let’s do some quick crude command line fu;

Note: I’ve obfuscated the email above so I don’t end up getting any more spam than I already receive daily.

Now that’s very interesting, I’m the only person that the server has been trying to mail which is getting denied by Verizon. Ok, so this problem is only impacting me, I guess that’s good.

So if it’s been going on for 30 days then I need to make sure the server is not listed on some RBL (real-time black list) somewhere. I’ll check http://www.blacklistalert.org/; 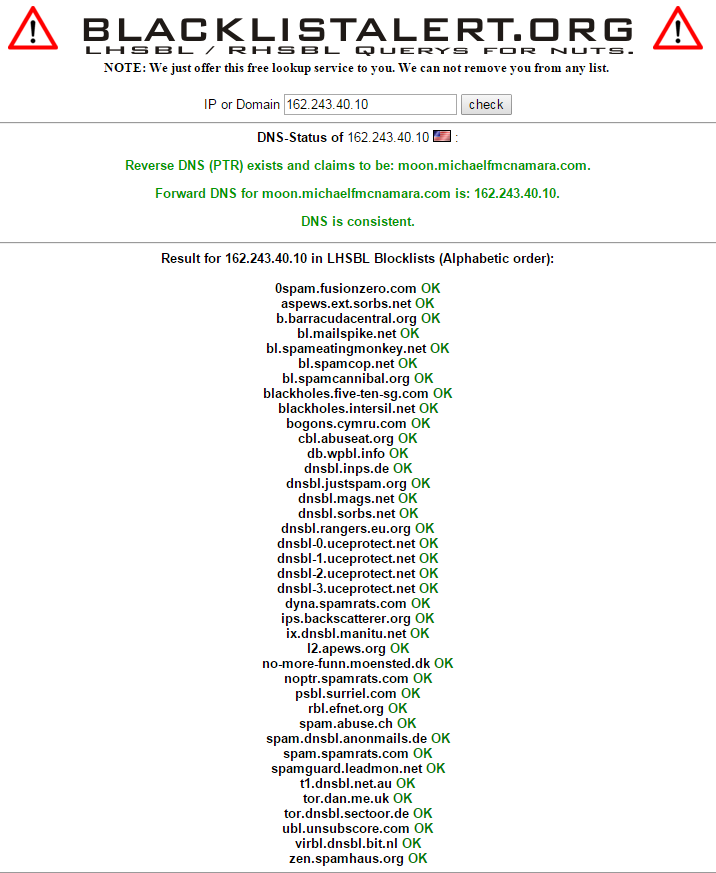 Alright so I wasn’t listed on any of the RBL, I looked through the logs for any other anomalies and found none, focusing again on mail for Verizon customers (verizon.net/verizon.com) and found nothing, I searched the discussion forums user database and blog comment subscriptions and found nothing. It must be a false positive on Verizon’s side, I’ll submit a request to Verizon following their instructions. I went to http://www.verizon.net/whitelist and I tried submitting a request as a Verizon customer and the form submission crashed with the following;

Ok, so I went back and submitted a request as an ISP (although I’m not an ISP but I’m starting to feel like one). That form was successfully submitted and I quickly received a reply via email.

That’s a boiler plate reply if I’ve ever seen one. Ok, so this doesn’t look like it’s going to be easy… I’ll need to chase the folks at abuse@verizon.net and probably in Twitter as well.

There’s a lot of talk about SPAM the last few weeks. Yesterday I read a Brian Krebs story titled, Don’t Like Spam? Complain About It. It was interesting to learn that the miscreants as Brian likes to call them are actively trying to avoid anti-spam activists. While I’ve filled more than my fair share of abuse reports over the years I doubt I’m on that list. A few weeks back I read that Greg Ferro was suspending comments on his personal blog as well as Etherealmind because of all the comment SPAM. While I’m generally disappointed I can understand his decision. It takes a lot of time and resources to keep the lights on and Greg and come to the point where he feels the bad outweighs the good. I’ve talked about SPAM on my blog on a number of occasions throughout the years – January 2013, January 2011, December 2010, September 2009 and March 2008.

Thankfully we have tools with WordPress including Akismet that are indispensable in combating the nuisance.  Unfortunately even with Akismet most blogs need to enable comment moderation, which requires a moderator (in most cases the blog author) to manually moderate comments from new visitors. In addition to the time lost by the moderator having to review each comment, large sites are wasting large quantities of CPU time and bandwidth which translates directly to operating costs and real $$$.

I’ve had to implement verification questions during account registration on the discussion forums that are specific to the networking industry in order to flush out the bots and miscreants. I’m using the following questions;

Thankfully those verification questions have kepts the SPAM bots to a minimum on the discussion forums. I’m not providing the answers because I don’t want to defeat my own verification questions, although they are easily found with a quick Google search. Almost everyone reading this should know those answers right?

Our first one is from Montreal, Canada I wonder how far a report to abuse@ovh.ca would get?

Our next one is from Romania, I wonder what response we might get from office@everhost.co?

Now we’re starting to get interesting with some traffic from Putian, China. I had no idea my little blog had a global reach? – I better check /var/log/secure for any intrusion attempts! And for our last hit we have Seattle, Washington US. I’m sure the folks at abuse@wowrack.com would jump all over our report. Wowrack.com resells their hosting to other clients and will usually direct you to contact their client directly.

A quick Google search reveals that I’m not the first person to see this template nor am I likely to be the last. The template is 304 lines long and while I won’t post it here you can look at it on Pastebin if interested; http://pastebin.com/raw.php?i=JV4wAUFr

These days there are so many places to “comment”. There’s the original location of the content, there’s Twitter, Facebook, Google+, LinkedIn, etc. There’s almost too many places to comment because you can’t really bring all those comments together under a single pane for someone who might be perusing the topic at a later date – but that’s another problem entirely.

Thankfully I’m not as big a target as Brian or Greg with all their visitors and pageviews so I don’t have it nearly as bad. I will admit that in the past I would check my blog daily to approve/delete comments, these days I’m probably checking my blog every 2-3 days which sometimes leads people to occasionally double post their comment because they don’t quite grasp that their comment needs to be approved before it will appear on my blog. I really value the comments and feedback I get so I won’t be disabling comments anytime soon. I will probably grumble and complain as Brian points out in his story but that’s the price I’ve decided to pay.

Over the past three months I’ve seen a 200% increase in comment spam to this blog. The numbers are staggering when you start to think about all the wasted resources.

There were some 47,722 spam comments or trackbacks on this blog in December 2012 detected and blocked by Akismet. There were only 44,640 minutes in the month of December so that means that there was more than 1 spam comment or trackback every minute for the month of December 2012. Think of all the wasted bandwidth, disk space, processing time, etc and it quickly starts to add up when look at the scale of it. I can still remember receiving my first comment and thinking wasn’t that nice of them “Great Blog!” only to realize after a few minutes that comment was intended to just showcase the URL link in the comment.

I’ve posted before about the problem of spam comments in December 2010. Unfortunately since I’m no longer using Apache the .htaccess files that I had setup then no longer work not saying that was a good solution but it was something at least. I’m curious what everyone else is doing? Is anyone blacklisting certain countries? I know from experience that won’t solve the problem, although it might help slow it a little.

I haven’t received one of these fraudulent email messages in quite a while so I thought I would share with everyone my good fortune. Anyone know what I should spend my new found fortune on first? Perhaps a Motorola Xoom or an Apple iPad2 or maybe a new PC? I am a Trustee and Executor of the estate of a deceased client(Dr P. MCNAMARA) in Budapest, Hungary. I have sat on a 5 year forgotten financial inheritance. In few weeks time, this fund will be transferred to the state as required by law since there’s no claim made.  We can both collaborate and share the proceeds 60/40. Your part would be to receive the funds as the beneficiary , since you have the same last name as my late client, and I will prepare the required documents and have it released to you in just days. Please reply this mail stating full name, phone and fax number details if interested. So I can start
the claims process as we build a mutual trust.

Many thanks in advance as I look forward to our partnership and trust.

The message originated from Yahoo China from a Douglas Wild (jd.zainnwild@yahoo.com.cn) with Yahoo user account of (X-RocketYMMF:) jdwild1@att.net.

Well they might not be saving the Internet but they’re definitely helping to save me a lot of time and effort.

If you’ve been following this blog you know that I’ve been fighting back the seedier elements of the Internet trying to stem the flow of SPAM both into this blog and into the discussion forums. In December of 2010 I resorted to blacklisting IP addresses from being able to comment on my blog and that seems to have helped stem the daily tide of ~ 50 a day to about 4-6 a day. After working on the blog I’ve turned my attention to the discussion forums. I found a great many bots were registering as users, passing the reCAPTCHA check and completing the email verification. Those bots then appeared to be performing one of the following; 1) capturing forum member email addresses, names, etc. and 2) re-posting previous posts with hidden or visible links that took users to scam websites.I needed something more than reCAPTCHA and/or email verification and I found Stop Forum Spam setup by Russ with help from pedigree. They are hosting a database where forum administrators and moderators can go to compare notes and check for previously flagged accounts by username, IP address or email address. Thanks to the Simple Machines Forum modification called Stop Spammer by M-DVD and snoopy_virtual I was able to easily integrate the API offered by Stop Forum Spam into the Simple Machines Forum installation that runs the discussion forums.

I’m really excited to see how well this works and I’ll make sure to report back after a few weeks.

I might also consider installing the httpBL mod by snoopy_virtual for additional protection.

Thanks to Russ, pedigree, M-DVD and snoopy_virtual for their contributions to the community.