It was another exciting morning around the Internet. Seems that CenturyLink(Level 3) had a meltdown that caused all sorts of issues for ~ 5 hours this morning starting around 6:04AM EDT and lasting until around 11:12AM EDT.

It started as it always does with reports of DNS issues, then CDN issues (Cloudflare) and eventually CenturyLink was identified as the culprit, or to be more precise any packets traversing the CenturyLink (Level3) network.

Thankfully Reddit was a great community resource and reports quickly started rolling in on these two threads;

I’ll admit I was floored when I found the original thread was deleted. There were hundreds of us struggling to source what was actually going on and trying to understand how we could mitigate the impact to our employers and some moderator deletes the thread?!? @$%#

The refugees eventually made their feelings known in a thread titled, META: I guess major news-worthy outages are off topic here?

I’m continually amazed by how much I don’t know and by all the little issues and problems that I encounter in my day to day tasks.  You never know what’s going to pop-up.

I recently stumbled over a very poorly configured DNS environment and thought I would share how to not configuring DNS forwarding.

There was a standalone Microsoft domain which had four domain controllers which were set to forward their requests to another pair of Microsoft DNS servers which eventually forwarded those requests to a fairly new Infoblox DNS environment. Upon looking at the Infoblox reports I noticed a number of non-resolvable hostnames at the top of the reports, they outpaced the next domains in the list by several million requests. Assuming that there was some mis-configured application server that was continually pounding the DNS environment I decided to hunt through the logs to see if I could identify the original requestor and get them to clean up their act. I enabled query logging on one of the servers and set out to examine who was making the request. Oddly enough I found that the other three DNS servers were making the request. Ok, I went to the next server and repeated the steps finding that the next server showed that again the other three servers were making the request. I repeated the process on the remaining two servers and found that all the requests for this bad hostname that I could capture weren’t coming from a specific client but were instead coming just from the servers themselves. This isn’t completely odd, the servers themselves can be clients at the same time but the volume of requests was huge and there was nothing running on these servers except for being Microsoft Domain Controllers and Domain Name Services for a very small Microsoft environment.

It wasn’t until I opened the Microsoft DNS server configuration that I was able to piece together what was happening. 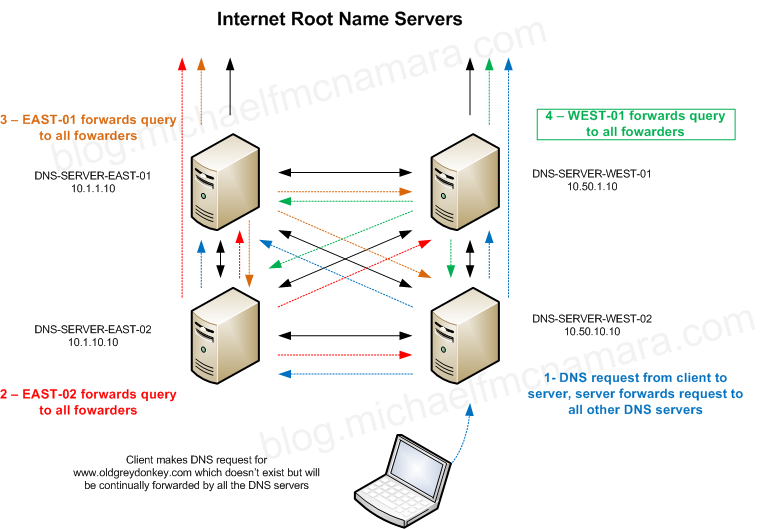 The servers were configured all as (multiple) Primary Masters for the internal domains but they had all been configured to use each other as forwarders along with OpenDNS. So in short the configuration was causing a DNS loop for any requests that failed to resolve. A query from a client to WEST-02 would be forwarded to all three DNS servers along with OpenDNS. Those three DNS servers would then forward that query again back to each of the other servers over and over and over. There is no TTL on a DNS query with respect to propagation. A DNS query can be propagated through as many servers as needed. There is a TTL value on the actual DNS record but that value is used in determining the caching lifecycle.

You should never configure a pair of DNS servers to forward to each other.

Here’s a short story, partially still in progress. With all the security breaches going on I thought for a few moments that I might have been caught up in one of them. This past Thursday night I noticed that both my virtual servers, which are hosted by Digital Ocean, were very slow to login via SSH, I mean extremely slow on the order of 8 to 10 seconds. Accessing the WordPress installation on one of those virtual servers was also extremely slow. I began to fear that one of my servers had fallen victim to some vulnerability or exploit and because I have shared ssh keys that might mean that both servers could have possibly been accessed without my knowledge or permission.

I checked that both DNS servers were responding and resolving queries;

I was able to resolve www.google.com from both 4.2.2.2 as well as 8.8.8.8 so I initially thought the problem wasn’t with DNS. However, when I was unable to figure out where the problem was I decided to disable DNS resolution within SSH by placing the following statement in /etc/ssh/sshd_config;

A quick restart of sshd (service sshd restart) and the problem seemed to be resolved.. but what had fixed it?

I went back to the /etc/resolv.conf file and decided to change the order of the DNS servers, placing Google’s DNS server ahead of Level3 and adding a second Google DNS server into the mix. Digital Ocean doesn’t maintain their own DNS infrastructure which is somewhat surprising for such a large provider.

And to my surprise when I went back to test the problem was gone? So was there some problem with 4.2.2.2?

With that problem partially explained I decided to apply the latest and greatest patches and security updates for CentOS 6.5. And there I also ran into any problem… upon rebooting I found that the OS was unable load the driver for the network interface eth0, returning the error;

With all that done I turned my attention toward my WordPress administration which was still extremely slow.  I had been guessing that the problem was probably related to some plugin that I recently updated so I went back and disabled all the plugins to see if I could possibly find the one that was causing the slow down. That search proved fruitless so I turn my attention to the performance of Nginx, PHP-FPM and MySQL, After optimizing the tables and some of the configurations within MySQL I found the response of the WordPress Admin portal better (3-5 seconds) but there’s still a problem somewhere there that I need to track down.

Here are a few resources if you are struggling with tunning your MySQL instance;

It’s never a boring day blogging on the Internet.

We recently migrated from Alcatel-Lucent’s VitalQIP to Infoblox for our IPAM (IP Address Management) solution. I hope to make a more detailed post reviewing Infoblox in the future, for now I’ll stick with the issue of integrating with the API interface. One of our goals for the past few years has been to enable MAC address registration essentially turning off the dynamic nature of DHCP. This would prevent someone from connecting any device to our internal network and getting a DHCP issued IP address. It certainly not a complete solution to the security dilemmas but it would be a good first step.

I do most of my work with CentOS and RedHat Linux because those are the distributions that my organization supports internally (even if I’m one of two people that support Linux across the entire organization). In this case I was working with a CentOS 5.7 server but I was having an issue compiling and installing the Infoblox Perl modules.

When I attempted to compile the Infoblox Perl modules I received the following errors;

This was with Perl 5.8.8 on CentOS 5.7 x64, unfortunately it seems this is a known issue with the version of LWP::UserAgent that is currently being distributed via the CentOS repository.

I was able to spin up a new CentOS 6.0 x86 server which was running Perl 5.10.1 and didn’t experience this problem. The installation was pretty straight forward (except for the issue above) but the API reference manual does a very thorough job of detailing all the possible installation methods on both Windows and Unix/Linux. I just opened a browser to one of the Infoblox appliances and downloaded the Perl modules.

Just replace the IP address of 10.1.1. with the IP address of your Infoblox appliance. I’m not sure why Infoblox hides their manuals behind their support portal, I just don’t understand why companies do that.  You can find the manual right here, Infoblox_API_Documentation_6.1.0.pdf.


There can be a few occasions where you may need to manually purge the local DNS cache and/or the actual web cache of a Blue Coat ProxySG appliance. While both the DNS cache and web cache will eventually age out it can be helpful to sometimes speed up the process by flushing/purging the DNS and web cache.

While this can all be done from the web interface I generally prefer the CLI (if available). The Blue Coat ProxySG appliances that I managed are setup for SSH access you may need to confirm that SSH is enabled (telnet might be enabled).

Let’s start by connecting to the BlueCoat ProxySG appliance (proxysg.acme.org);

Once we’re connected we need to go into privledged mode to issue the commands;

Now that we’re in privledged mode we can clear the web content cache with the following command;

And to clear the DNS cache we can use the following command;

And don’t forget to logout when you’re all done.