We needed to assign a temporary IP address from the serial interface and then use Internet Explorer to connect to the temporary IP address. We then selected the option to “Restore” the configuration from a backup. The backup needs to be an FTP site with the appropriate username and password. 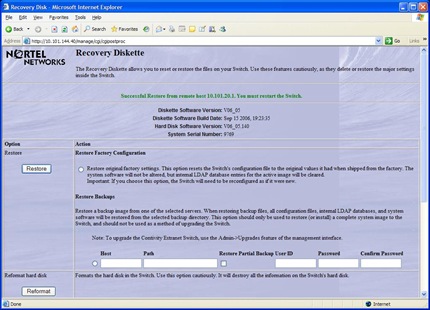 The restore took about 30 minutes to complete and never really gave any indication that it was working other than the IE logo just swirling in the upper right hand corner of Internet Explorer. We were able to use Nortel’s Java Device Manager to confirm that there was a lot of data moving over the Ethernet switch port connecting the Nortel VPN Router so we knew it was probably working.

I should point out that the Nortel VPN Router 1010, 1050 and 1100 do not have floppy drives although they may support a PROM based recovery option which would need to be executed from the CLI (serial) interface while the router booted.

It also seems that Nortel will be manufacture discontinuing the Nortel VPN Router 600, 1010 and 1100 at the end of December 2008. You can find the announcement here.